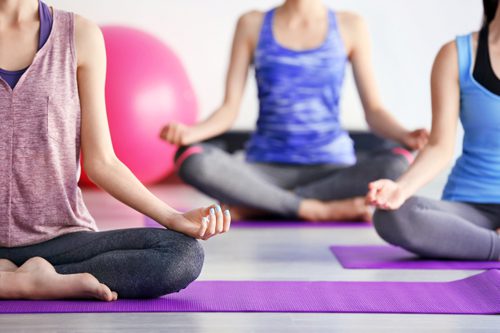 Ongoing research in the study of effective addiction treatments reveals the potential of alternative techniques as part of a detailed recovery plan.

The practice of yoga is an alternative approach with promise. It incorporates concepts of breath relaxation, nerve-stimulating movement, and present moment awareness.

To understand how yoga may help reduce the impulsive behavior often associated with addiction, it’s important to first learn what’s happening in the brain and the body.

How Addiction Tricks the Brain

Your brain is a complex machine, with layers of systems that operate beyond your consciousness. If one system is compromised, the brain’s powerful neurotransmitters will do whatever it takes to function properly.

When you feel stress, your brain responds with the corticotropin-releasing factor (CRF). CRF is responsible for controlling behavioral and sympathetic nervous system responses. When physical, emotional, or mental stress occurs, CRF increases. This calming reaction is important for a short period of time.

However, when substances such as drugs or alcohol repeatedly interfere with this process, CRF may remain at a heightened state. Then the brain requires more of a toxic substance to produce a similar stress-reducing experience. Craving this sensation is what drives impulsive behavior in many people.

A vitally important neurotransmitter is gaba-animobutyric acid, or GABA, which also helps regulate your nervous system. GABA is linked to the reward center in your brain and is associated with lessened anxiety and a more positive mood.

For someone struggling with substance abuse, especially alcoholism, his or her brain is “tricked” by a similar chemical effect that GABA provides. Multiple receptors throughout an individual’s brain respond to the activation of the reward center. Someone in need of mood enhancement may not be able to resist the compulsive urge to use the substances that produce it, no matter how destructive that behavior may be.

Impulsive Behavior as a Condition

Impulse control disorders (ICD) are legitimate concerns for some people and often present in childhood.

If someone is dealing with an undiagnosed or untreated ICD, there’s a stronger chance of drug and alcohol abuse. This makes addiction recovery even more challenging without thorough treatment.

Researchers are still uncertain as to the absolute causes of ICDs, but some studies indicate the neurotransmitter serotonin may be reduced in some way. Serotonin manages a number of the body’s vital systems, including temperature, appetite, and sleep patterns; as well as memory, perception and behavior, and cognitive functioning.

Yoga Is the Pause Button

Clinical trials indicate that instead of using harmful substances to create a sense of calm wellbeing and enthusiasm for life, people in recovery can use yoga to prompt the exact same neurotransmitters essential to healthy brain and body function:

Many people also think yoga demonstrates the difference between living in the present moment and worrying about the past or the future. If you’re trying to regulate your breath and work into a particular posture, your mind rarely wanders. The resulting calm produces a positive state of mind and body.

For people dealing with substance abuse and impulse control, focusing on a non-threatening present moment may be a new concept they can embrace for wellness.

Do you know how to “urge surf?” It’s a recovery concept that allows you to acknowledge a craving, and even ride with it, but not act upon it.

The mindfulness created during regular yoga practice helps improve upon the ability to create awareness like this. You then have control over impulsivity and know the difference between action and reaction. Try these techniques:

As you venture into a rewarding life without addiction, your treatment plan may involve a variety of activities designed to help improve impulse control and embrace new techniques for wellness, including yoga.

Because of a focus on present health, a dedicated yoga practice may also reduce addictive relapses triggered through impulsive behavior by:

When you return to daily life outside of a treatment center, seek a qualified yoga instructor who offers a program that specializes in addressing impulse issues related to substance abuse. This yoga practice may place particular emphasis on understanding presence and observing circumstances in the moment without threat.

To learn more about about Twin Lakes addiction detox rehab near Atlanta, please contact us today at (877) 958-0778.

Other sources:
NCBI: A randomized control trial of the effect of yoga on Gunas (personality) and Health in normal healthy volunteers and A narrative review of yoga and mindfulness as complementary therapies for addiction.
psychologytoday.com/blog/teen-angst/201307/yes-program-reduces-teens-impulsive-behavior
Scripps Research Institute: The Effects of Alcohol on the Brain.
Kripalu: Why Yoga Is a Powerful Tool in Recovery and Riding the Waves.