Why Women Have Greater Risk of Alcohol-Related Deaths

Many women love to get together for social activities that involve alcohol. 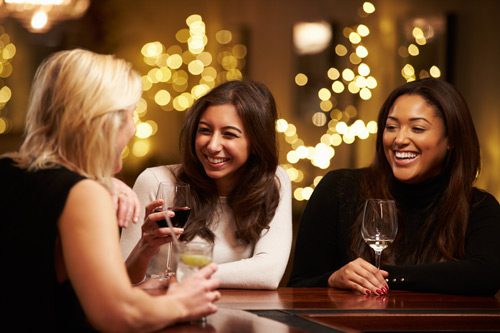 From yoga and book clubs to painting parties and pub crawls, the “in thing” is to do something while drinking.

More people than ever are imbibing. NPR shared a study from JAMA Psychiatry released in 2017 which noted a sharp increase overall in high-risk consumption for Americans: up nearly 30 percent between 2002 and 2013.

Just a few years ago, Robert Brewer with the Centers for Disease Control co-authored a study examining the gap between moderate drinkers and people identified as alcoholics. The results, shared in the publication Preventing Chronic Disease, revealed that many people may raise only a glass or two during the week, but on weekends, end up consuming quite a bit.

This type of behavior changes their status to excessive drinkers. Based on the study data, one in three people fit this description. Women need only consume eight or more drinks a week to slip into this category. But what makes this definition more complicated is these individuals aren’t considered alcohol-dependent because they don’t experience withdrawal symptoms when they consume less, nor do they develop an increased tolerance for the substance.

However, women still have a greater risk of alcohol-related deaths.

In late 2018, details of a more comprehensive study made headlines, mainly because the statistics were more in-depth on a singular topic: alcohol-related deaths.

Research gathered between 2007 and 2017 by the Institute for Health Metrics and Evaluation (IHME) presented the following:

There are many factors that contribute to these findings:

IHME, located at the University of Washington, cites a greater social acceptance of drinking, along with a heightened expectation to participate in alcohol-related activities, as two primary reasons why women are more at risk now than ever before. As a legal substance, any event or gathering serving alcohol is available to all persons over 21—and it’s far more acceptable to consume alcohol than illicit drugs. In some situations, the assumption is they’re enhanced by the presence of alcohol.

WebMD shared data from a 2017 study sponsored by NIAAA indicated “female alcohol use disorder in the U.S. increased by 83.7 percent between 2002 and 2013.” Further, while men drink more overall, there’s less of a dividing line between male and female consumption. According to the National Institute on Drug Abuse, research from the past two decades indicated “more females than males are drinking…and for the first time in history, are more likely to drink by 10th grade than males.”

NIAAA also noted “5.3 million women in the U.S. drink alcohol in a way that threatens their health and safety.”

Why Women Have Greater Health Problems Because of Alcohol

Women experience higher blood alcohol concentration than men because they have less water in their bodies. They also feel the effects of alcohol more quickly and for extended periods of time. NIAAA research suggests these physiological aspects are why women are more vulnerable to traumatic experiences, chronic illnesses, and death.

For a woman with a drinking problem, health risks include:

Women are also more likely to be victimized by alcohol-related traffic accidents and violence.

Help Is Available Right Away

If you recognize that alcohol dominates your social activities and you fear over-consumption might put your health at risk, there are options.

For example, Twin Lakes Recovery Center has an outpatient treatment program to provide the education, therapeutic services, grounding, and support you need to end excessive drinking or prevent alcohol dependency.

We also offer an extensive residential treatment program if there’s a strong likelihood you have a chemical dependency complication and require medical attention, as well as further behavioral and health modifications to change your life for the better.

To learn more about our detox and treatment programs at Twin Lakes, alcohol treatment centers Atlanta, please use the convenient contact form.